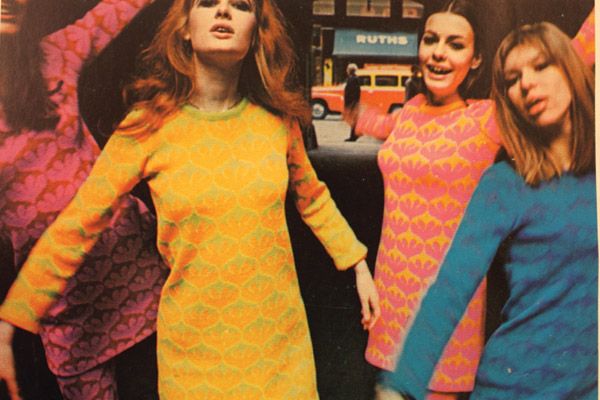 Mah-Jong was a Swedish design company that translated socialism and feminism into clothes. It existed from 1966 to 1976, and in other forms thereafter. My MA thesis deals with the ten initial years. It is divided into three chapters, arranged in an attempted narrative, although the second and third chapter correspond chronologically.

The first chapter describes influences from British fashion in 1966 and 1967, and how the use of bold colours represented an uproar against the establishment. However, the designs and representational similarities with Swinging London facilitated Mah-Jong to be characterised as youth-oriented clothes, when the intention was for them to appeal and be used widely, available to everyone. It was also used in the creation of a national fashion identity. The first chapter is an argument for the symbolic duality present in the associative total of bold colours and Swinging London in the mid-1960s: they were both agents for rebellion and fashion.

In 1968, an increased politicisation of the firm occurred: reoccurring styles and discarding of artificial yarns. The firm rejected fashion vocabulary and the fashion system at large, as a result, becoming popular amongst socialist feminists. The tactile experience of cotton, its softness and naturalness, was used by Mah-Jong, and at the same time promoted in women’s culture and feminist writing. A similar relationship between materiality and a softer male ideal in the ‘velour man’ is also investigated.

Marx’s analysis of the order of production influenced Mah-Jong’s decision to produce in Sweden. They became active in the fights of seamstresses to maintain their jobs, and at the same time tried to educate their customers about global capitalism’s exploitation of third world countries in the name of cotton. Their activities were an attack on the Social Democratic Party. Ultimately, Mah-Jong’s unwillingness to surrender socialist ideals made it impossible for them to survive in Sweden.

The thesis is available at Royal College of Art’s library and in the National Art Library at Victoria & Albert Museum. If you are interested in my work, please contact me.